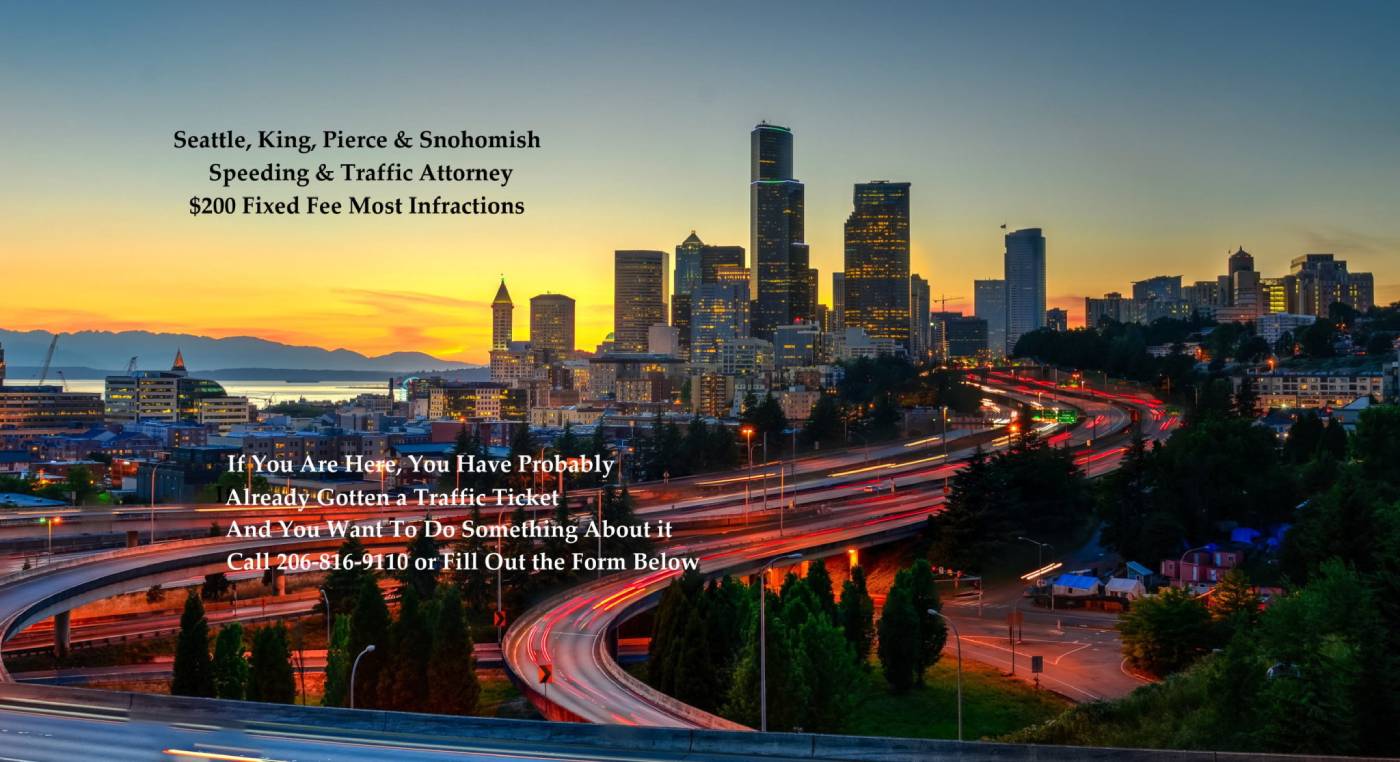 Speeding Tickets and Other Traffic Violations Can Raise Your Insurance Rates and Put Your Driver’s License at Risk.  Traffic Ticket Lawyer Serving Seattle Metro Area Speeding and Traffic Courts Since 2005. We Have The Knowledge and Expertise to Protect Your Rights and Record.

Call for a Free Case Evaluation & Quote.  We Offer a Flat Fee For Traffic Ticket Cases.

A Washington State Traffic & Speeding Ticket Lawyer, Antone Weber has personally appeared on over 7000 traffic ticket cases. We defend clients in most Seattle and King, Pierce, Skagit, Thurston & Snohomish County & City Courts within 75 miles of Seattle.    Low $225-$275 Fee for most single Traffic Tickets.  Most were dismissed, reduced or the charge negotiated to a non-moving (non-insurance) violation, with very few found committed as written.  Give us a call: an initial consultation is free; We will review your case and give you an estimate of the cost of fighting your ticket. We will take care of all the paperwork, and appear in court for you.  You seldom will need to be there. Compare that with possible insurance or employment costs. Once a violation is found committed, it will be too late to do anything about your ticket if you find the costs are greater than you expected.

No two traffic cases are the same.  Judges and courts are different from one another, prosecutors are different, and the specifics of your violation and situation are different.   By interviewing each client, we can customize our case based on the circumstances of the ticket, the nature and practices of the court, prosecutor and judge, court rules, statutes and case law, and your needs, driving record or employment situation.  Such flexibility is not possible when hiring a lawyer by filling out a form on a website.

Most traffic court tickets are dismissed or a change to a non-moving violation is negotiated; with very few found committed as written. The advantage to having a experienced Washington traffic lawyer defending your driving offense is they know how and when to fight, and how and when to deal in order to get the best possible outcome for our client. The real cost of a traffic ticket is not the fine but rather the increase in insurance costs, which might run into the thousands of dollars over the time that it will be on your driving record.  A driver who gets too many tickets found committed could also have their license suspended and fall under requirements for expensive SR22 insurance once reinstated.  For a driver under the age of 18, just two committed traffic violations will result in the loss of their hard-earned privileged to drive.  For professional drivers one ticket might mean the loss of a job.  Our law firm does criminal traffic defense because If charged with Reckless Driving, Driving With a Suspended License, or Driving Under the Influence there are added fines and penalties, and a criminal record to consider.  For more on attorney Tony Weber click about-tony-weber:

No one wants to get a traffic ticket as it is not a fun experience, but most people have gotten one or more in their lifetime. While nine out of ten people will just pay the ticket whether it was their fault or not, and move on, it is usually worth it to hire a Speeding Ticket Lawyer to fight your ticket. Often people get tickets when they don’t quite deserve them. Perhaps you got a speeding ticket when you were just keeping up with the flow of traffic, or misunderstood what the posted speed limit was, or someone was tailgating you. Perhaps you didn’t count to two before changing lanes after turning on your turn signal, or misjudged the timing of a red light. Whether your fault or not, you have a much better chance of having the ticket not effecting your driving record if you fight it.

The fine on the ticket is only the first and most obvious cost to a ticket. A single traffic infraction on your record may cause an insurance increase that can cost you thousands of dollars.  A $20 increase in your monthly rates from just one ticket totals over $700; $50 to an additional $1800. If you have teenagers on your insurance policy, costs from a single ticket can go up swiftly. They may also be suspended by DOL for just two violations, even if on the same ticket. If you drive for a living, with a CDL, with a ride-share company like Uber or Lyft, or drive a company car, your driving record can be the difference between being employed or not. Too many tickets can also cause your license to become suspended or even revoked. If you choose to go to court yourself, add in the lost time and wages from taking the day off.

When you get a Puget Sound traffic ticket, your first instinct is likely to try and find a mistake on the ticket or how to prove that you didn’t do whatever the ticket said that you did. However, do you know what errors will be sufficient under the law, to a judge, for a dismissal? A lawyer knows how to find errors that not many people will notice, and if there is an error or mistake on your ticket, can argue their legal importance. These errors will likely be missed by most people fighting by themselves to have their traffic ticket dismissed due to simple inexperience, so you can benefit greatly from having a lawyer that knows what technicalities they can use to help you get your ticket dismissed.

Each case is unique, and what we might be able to do to help you will depend on the circumstances, your history, and the court. We would like to speak with you about how we might be able to help; a consultation is free. Please fill out the form above and we will call you, or call us at 206-816-9110. Leave a message if no answer; we may be in court or talking with a client. Most calls are returned inside an hour. After business hours submissions may not be returned the following day.

Use of this Website is for informational purposes only.  Its use, the Submission Form or the Consultation is confidential, but does not create an attorney-client relationship.